TODAY at 2:20 p.m. - National Emergency Alert System Test to Take Place Minute-long test will be seen and heard on television and radio stations 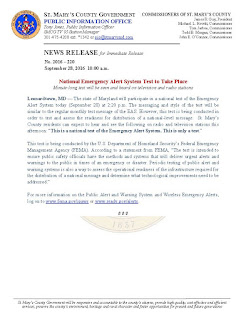 2015 Semifinalists of "America's Got Talent" saves Bluegrass for Hospice - 2016!

2015 Semifinalists of "America's Got Talent" saves
Bluegrass for Hospice - 2016!

California, MD September 19, 2016: The annual Bluegrass for Hospice will take place on Saturday October 22, 2016 at the Flat Iron Farm in Great Mills, Maryland.  Starting at noon, this family event will feature a full day of fun with music, raffles, silent auction, and door prizes.  “Mountain Faith” who appeared on American’s Got Talent TV program in 2015 and made it to the semifinalists will headline the event along with Bluegrass greats, The Larry Stephenson Band from Nashville, TN along with other local talent.

Originally scheduled were The Willis Clan from the TLC TV Network and Nashville, Tennessee.  But due to family emergencies, the family and management decided to cancel all of their forth coming shows.  However 2 great groups are lined up to continue a family friendly show.  Presented by Jay & Michelle Armsworthy, Bluegrass for Hospice, in its 8th year, will benefit the Hospice of St. Mary’s, Hospice House.  Tickets can be purchased online at www.bluegrassforhospice.com.

Mountain Faith (MFB) is a family band from Western North Carolina and play Bluegrass/Americana-Roots music.  Since the year 2000, The Mountain Faith Band has performed their unique brand of music to audiences from coast to coast at Fairs, Festivals, Colleges, Universities, Performing Arts Centers, Corporate Events, and Churches.

What makes them an appropriate fit for Bluegrass For Hospice, is that their humility, kindness and love of community shines through on stage and casual conversation.  Visiting hospitals to bring joy and entertainment to those who could use a lift is something MFB loves to do. When their tour schedule allows, you may find the MFB performing a prepared program to promote literacy and character education at elementary and high schools along their route.  Above all else, MFB is thankful for the opportunities God has provided them through music.

There 2015 highlight was performing for over 3,000 military men and women at Al Udeid AFB, Doha Qatar.  Thus far in 2016 MFB has shared the stage with legends Willie Nelson, Charlie Daniels, and Loretta Lynn to name a few. On September 16, 2016 THE GRAND OLE OPRY stage lit up with the debut of The Mountain Faith Band. They have performed the National Anthem for the Atlanta Falcons, Carolina Panthers, Atlanta Braves, SF 49ers, plus halftime shows for The Atlanta Falcons and Carolina Panthers.  There latest album, “That Which Matters” debuted #1 on Billboard Americana-Roots Charts. MFB has celebrated multiple #1 songs over their career.

For 2016, MFB have been nominated “Emerging Artist of the Year”, by the IBMA.  Summer McMahan (Vocalist for MFB) was the 2015 “Momentum Vocalist of the Year” presented by IBMA.  With the support of millions, MFB advanced to the 2015 semifinals of “America’s Got Talent” and has since accumulated over 36,000 Facebook Friends.

The Larry Stephenson Band has roots near Southern Maryland.  From just across the Potomac in King George, VA, now making his home in Nashville, TN is highly regarded as one of bluegrass music's finest high lead and tenor vocalist.

Larry started playing with his Dad beginning in the mid ‘70s where he started him on the mandolin at age 5.  By the age of 13, Larry had cut this first record.  He credits the rich music scene of Virginia for much of his musical success, having seen and heard the first generation bluegrass performers at festivals, shows, and on the radio.  One of his childhood performances with his Dad’s band was at one of the Take It Easy Ranch music festivals in Callaway, MD that were held in the early 70’s.

After high school graduation, he worked and recorded with Cliff Waldron and Leon Morris while soaking up the Washington, D.C. rich musical scene, which included cutting edge bands like The Country Gentlemen and The Seldom Scene as well as traditional bluegrass and old-time music. In 1979, Larry began touring and recording with Bill Harrell & the Virginians where he stayed over four years. In 1983, he joined the famed Bluegrass Cardinals performing and recording with them for over five years. That band configuration is often referred to as one of the "classic lineups of the Bluegrass Cardinals."

The award-winning Larry Stephenson Band has been entertaining audiences for over 25 years including their numerous performances on the Grand Ole Opry, RFD-TV and many more headlining concerts. Larry Stephenson is a “Virginia Country Music Hall of Famer” and 5-Time SPBGMA “Male Vocalist of the Year”.  The band has received critical acclaim for their numerous bluegrass albums over the years and continues that success with their latest album, “Pull Your Savior In”, an all-gospel project and winner of the 2015 SPBGMA Album of the Year Award.  Larry is joined by the talents of Kenny Ingram, Kevin Richardson and Matt Wright.

Other Bluegrass talent will feature local favorites: Recycled Bluegrass, 15 Strings, Bubby Abell & Spoon Creek, and Bluegrass Gospel Express.  There will also be a special “Bottom County Bluegrass” tribute to Charlie Thompson, with this year’s event in his memory as well as longtime patron, Jay Russell.  Troy Jones will provide sound for the day’s event.

There’ll be many door prizes given away, 50/50 raffles, silent auctions, and various vendors.  Food will be available for sale by the “3rd District Optimist Kruzin’ Kafe” and will feature some fine Southern Maryland style cooking at affordable prices.  Please bring your lawn chairs and BYOB.  The event will be held inside a handicap accessible arena style barn with outdoor bathroom facilities.  The doors open at 11 am and the festivities begin at noon.

In addition to all of the great entertainment, there will also be a food drive requesting non-perishable food items to support the Helping Hands Food Pantry of Southern Maryland.  Everyone is encouraged to bring, but it’s not required to enter the event.  As always, they are in much demand for contributions.

For out of town guests, accommodations can be provided by the “new” Holiday Inn Express located at 45260 Abell House Lane in California, MD.  Ask for the “Southern Maryland Bluegrass Festival Discount Hotel Rate” to receive a special very low affordable rate.

Tickets for Bluegrass for Hospice-2016 can be purchased in advance for $25.00 and will be $30.00 at the gate.  Children under 12 are admitted free with a paid adult.  You can purchase tickets by mail by sending a self-addressed stamped envelope along with a check made payable to “Hospice of St. Mary’s” and mail to P.O. Box 741, California, MD, 20619.  To order by credit card online from “Brown Paper Tickets” go directly to http://www.brownpapertickets.com/event/2564164.  If you’d like to purchase them in person, they are available at The Trading Post on the corner of MD Rt. 5 and Indian Bridge Rd in Great Mills, MD.

Vender applications are now being accepted for the event.  For more information, to be a sponsor, or to reserve a vendor space, contact Jay Armsworthy at 301-737-3004 and check the website as well, www.bluegrassforhospice.com. 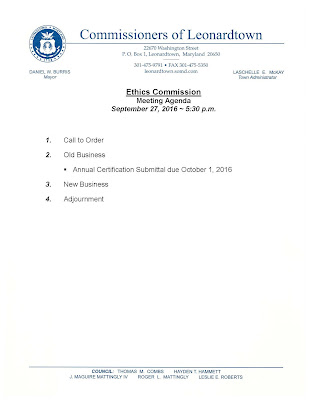 3rd Saturday at the Craft Guild Shop - Come on by! 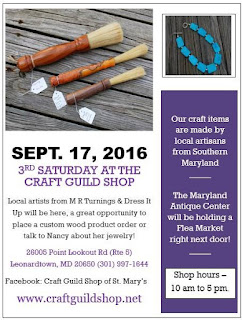 How to Increase Your Local Business Presence on Google 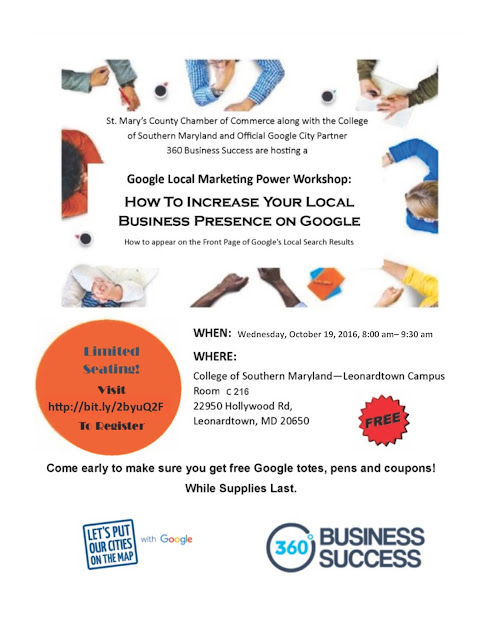 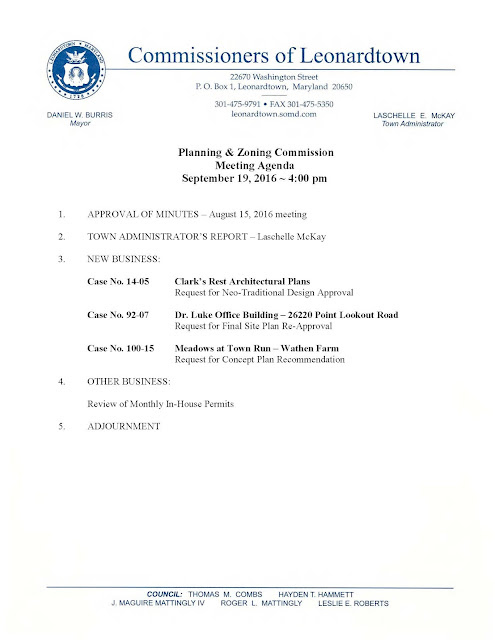 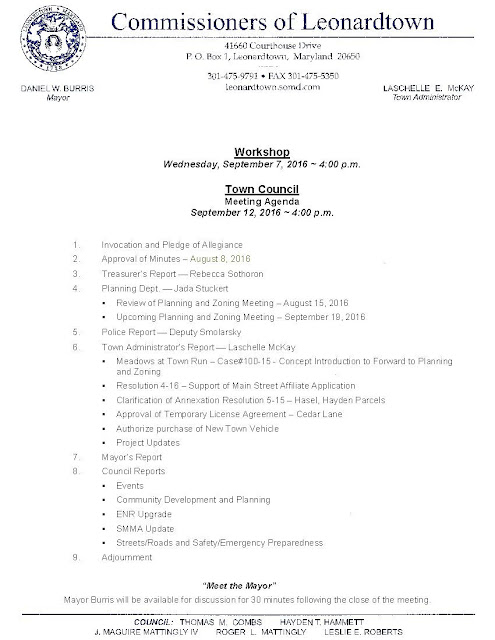