St. Mary’s Ryken Presents the Tony Award Winning Musical “Once Upon a Mattress” 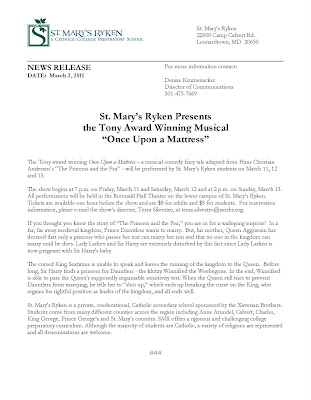 St. Mary’s Ryken Presents
the Tony Award Winning Musical
“Once Upon a Mattress”

The Tony award winning Once Upon a Mattress – a musical comedy fairy tale adapted from Hans Christian Andersen’s “The Princess and the Pea” - will be performed by St. Mary’s Ryken students on March 11, 12 and 13.

The show begins at 7 p.m. on Friday, March 11 and Saturday, March 12 and at 2 p.m. on Sunday, March 13. All performances will be held in the Romuald Hall Theater on the lower campus of St. Mary’s Ryken. Tickets are available one hour before the show and are $8 for adults and $5 for students. For reservation information, please e-mail the show’s director, Tessa Silvestro, at tessa.silvestro@smrhs.org.

If you thought you knew the story of “The Princess and the Pea,” you are in for a walloping surprise! In a far, far away medieval kingdom, Prince Dauntless wants to marry. But, his mother, Queen Aggravain has decreed that only a princess who passes her test can marry her son and that no one in the kingdom can marry until he does. Lady Larken and Sir Harry are extremely disturbed by this fact since Lady Larken is now pregnant with Sir Harry's baby.

The cursed King Sextimus is unable to speak and leaves the running of the kingdom to the Queen. Before long, Sir Harry finds a princess for Dauntless - the klutzy Winnifred the Woebegone. In the end, Winnifred is able to pass the Queen's supposedly impassable sensitivity test. When the Queen still tries to prevent Dauntless from marrying, he tells her to “shut up,” which ends up breaking the curse on the King, who regains his rightful position as leader of the kingdom, and all ends well.

St. Mary's Ryken is a private, coeducational, Catholic secondary school sponsored by the Xaverian Brothers. Students come from many different counties across the region including Anne Arundel, Calvert, Charles, King George, Prince George’s and St. Mary’s counties. SMR offers a rigorous and challenging college preparatory curriculum. Although the majority of students are Catholic, a variety of religions are represented and all denominations are welcome.
Posted by Leonardtown, Maryland at Monday, March 07, 2011