What if Mozart had been born in Rio? What would it sound like if Dave Brubeck had written Beethoven's Symphony No. 9?
On Saturday, July 6, in historic Downtown Leonardtown, come enjoy unique versions of classical music in contemporary jazz styles performed by the “Clazzical Jam” jazz group. Guests will hear Don Stapleson on flute and his fellow St. Mary’s alum Peter Fields on guitar. Stapleson and Fields will be joined by Fred Lieder on the cello. The concert will be held outdoors on the Town Square, starting at 7:00 p.m. It is free and open to the public.
Sample Playlist includes the following:
- Bachbird (combining the Prelude from Bach’s Cello Suite No 1 in G Major with Bye Bye Blackbird)
- Blueberry Madigan (Mozart’s Elvira Madigan meets Blueberry Hill)
- Havana Nacht Musik (The Rondo from Mozarts Eine Kliene Nachtmusik as an Afro-Cuban piece)
- Nocturne in F Minor (One Chopin’s beloved miniatures as a swing tune) 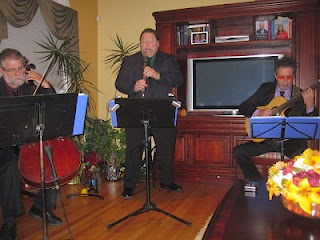 Don Stapleson, director of the St. Mary's College Jazz Bands, is well-known locally and in the Washington metropolitan area. An accomplished saxophonist and gifted flutist, he performs with his own group, “The Don Stapleson Quartet,” as well as with the popular classical/jazz crossover group, “Clazzical Jam.” He has performed with Ray Charles, Dexter Gordon, Nancy Wilson, Wayne Newton and Rock and Roll Hall of Fame inductee Martha Reeves. He has also appeared on MTV with Danny Gatton.
Peter Fields has captivated audiences in the U.S. and Europe with his mastery of diverse musical styles and unique approach to guitar techniques. In addition to his sophisticated original compositions, his repertoire ranges from classical guitar, jazz and Latin music masterpieces, to extraordinary arrangements of R&B classics, and interpretations of ethnic music from various parts of the world. He can be heard on numerous recording projects on Polygram and various independent labels and on television programs for Fox, National Geographic, Discovery Channel and others. In January of 2003, Fields released “Stillness of the Heart,” an evocative collection of compositions for classical guitar which has received rave reviews and airplay throughout the country.

Fred Lieder has been a fixture on the Washington area music scene for 25 years. He plays classical, jazz, blues, rock and Celtic on his cello. He has arranged many rock tunes for solo cello including works by the Beatles, Stevie Wonder, Jimi Hendrix, and Carlos Santana. He may be the only cellist in the D.C. area who has played at such diverse places as the Kennedy Center and Wolf Trap, but also Blues Alley, Rams Head, The Birchmere, Iota Club & Café, and the State Theater. His current release is "Cello Blues" and he has recently released his first book, "MY Cello Has the Blues," an instructional book on playing the blues on cello.
Posted by Leonardtown, Maryland at Wednesday, June 26, 2013